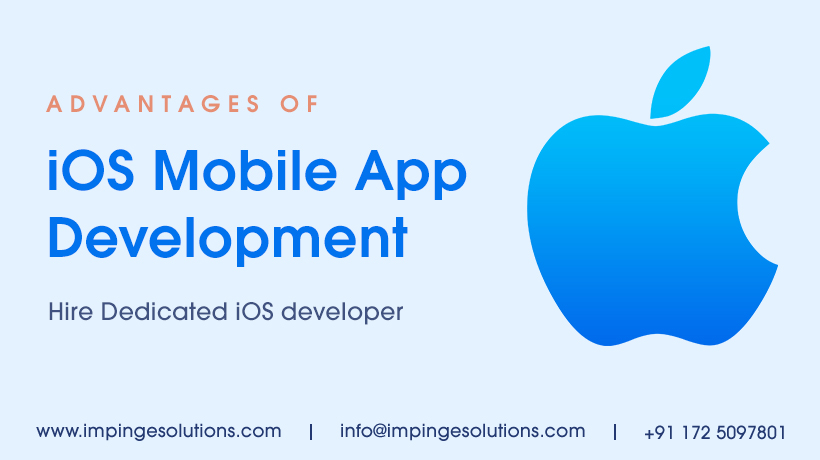 In today’s digital world, there has always been a modern world of blooming technology. Similarly for growing companies, developing a business app has become a necessity. According to stats, the highest percentage of traffic is received form smartphones. Be it for personal or for official use people have inclined towards this device exponentially.

If we talk particularly about the prominence of iOS mobile apps, in 2018 there are around 2.2 million apps available in the Apple app store. In fact in the year, 2016 Apple app store fetched the 2nd position in the app market. This shows how iOS devices are getting popular mainly for their unique performance and the perfect functionality features that users actually love using.

But, before we move forward to the benefits of iOS app development, it is important to discuss the most important and the most common aspect of it.

What Does an App mean for a Business?

Whenever the benefits of iPhone app development come to picture, there always arises a question, why develop the mobile app and which one is appropriate either iOS or Android? Well, both of these platforms have their own advantages. So, before you go with iOS app development, it is important that you hire a professional app developer, helping your business to grow or maybe read up various kinds of post online to help you know better.

1. An App for all the Businesses

No doubt, an ever-changing business environment today needs your team to have an approach to the correct information on the move. With the requirement to have all the key information on fingertips now, smartphones have actually become crucial for the businesses worldwide. Based on the requirement for a specific organization, they may find a lot of solutions to solve their business requirements.

Today, every company dreams to go global and establish their roots in foreign countries. And if we talk about the developed countries, iPhones are one of the popular devices there. For example: In U.S.A and the UK having an iOS application offer the companies to expand their business in these countries. Because of the esteem of iPhones in all these countries, the company has a very good chance of taking a solid position in their market.

When developing a business application, a company has to make a choice of the platform with other interesting features as well. It should definitely offer the highest level of security to its users. And, when it comes to iOS there are no security threats from external platforms. The entire system is designed in a way that it offers a very strong shield for the malware and viruses making it a sound choice for developing the efficient business applications.

Android applications produce less than 10% of the total expenses on their development which is certainly not a profit to be counted for a company. Whereas using iOS apps can direct a company towards very healthy finances and high ROI. Moreover, scalable iOS applications have the strength to cater to the investment-worthy customers while enhancing the reach of its value-added businesses.

iPhone users know how difficult it is to get space into an app store. Only applications that are completely tested and useful in the store are uploaded here. Therefore, when a user sees some business application in an App store, the person knows that the company should be worth its price and its time if it has been accepted in that platform.

Though security measures are in its way to perk up the security aspect of an online payment, iOS application makes it really sage for its users while encrypting the offers on online websites and eliminating threats like hacking, phishing, etc.

The image of iOS and support in the market like iPad and iPhone are making them all increasingly important to improve their sales as well as business productivity. This ensures that investing in this mobile platform for a business application can be a good choice without any doubt.

Android permits the smartphones or the devices to be loaded with third-party applications with the compromised quality while charging exorbitant subscription rates. In fact, many pre-installed apps do fall short of their promised quality while offering an overall deceptive experience. On the other hand, Apple does not let any carrier junk or any third party apps. This is one of the benefits of the users to enjoy over Android ones.

iOS is many steps ahead in the race if we talk about its power management. The key reason being iOS is very much repulsive to all the third party apps running in the background. Another strong reason is battery life which is a strong metric to care about when purchasing a smartphone. Apple certainly offers its users an improved sense of satisfaction.

The iOS software offers a mobile development option having a reliable reputation. There are very fewer devices an app needs to support, making less fragmentation for developers when it comes to testing and building the app. The frequent updates from Apple allow its users to have the current system on their mobile devices at all the times. This also reflects that there are least versions of the software that your mobile need to be more compatible with. The stability that iOS offers permit its developers to spend more time on focusing on the individual elements of the quality assurance and construction of the mobile app, instead of any need to restructure and resize it for a variety of software numerous devices and versions. Our developers can actually make use of this stability to build up a secure platform which is unique to you and your business.

Apple products enjoy credibility within the United States, so if in any case, your target market is more international than national, iOS mobile app development is the perfect fit for your business. The prominence of Apple mobile device among the American customers permits you to target more particular regions, where there is a higher volume of such products. The developers understand the importance of the iOS platform and may construct a mobile app which depicts your business while enduring competition among other apps built on this operating system and launched into the Apple marketplace. Based on the recognition and popularity of Apple software, it is easy to build and market your mobile app as per the demographics and influencers that your business wishes to reach.

Apple users have now come to higher expectations in the design and functionality of their mobile devices and mobile apps. However, regular updates throughout the system permit developers to pay attention to optimizing your platform in order to support the latest version of iOS. Instead of needing your app to work with different devices and versions of software, your iOS app will have a wide reach among the consumers, without losing any quality. This also permits small development cycles and testing time that permits developers to focus on the feel and look of the mobile app while spending more time and getting it ready for the market. Our developers work to design a mobile app that may match the expectations of iOS users and manage it over time to reflect the ever-evolving market.

iOS mobile apps are heavily dependent on the user input. The rankings that determine the popularity of apps in the app store take the reviews and ratings from consumers into account, adding on to the number of daily downloads. This user-generated approach permits for even reliable measuring system when it is about determining the success of the mobile app once it gets launched in the market. It also let the businesses tap into the reactions and opinions of consumers who may use this forum to critique and comment the app itself. This is one of the great tools that developers use for making adjustments and updates to your mobile app when making the necessary changes to improve the platform regularly so as to keep up with the consumer demand and remain competitive in the market.

iOS app earns more revenue, it is easier and somewhere less time to consume to build it up. iOS users spend on apps and also upgrade to higher versions of OS. You may also stop working on the older versions without any delay. Therefore switching to iOS app development is worth considering. Do it at an early stage and beat the rush hour traffic now! And if you actually seek your business to grow in the desired direction, hire iOS app developer to go all the way and make it wonderful experience ever.