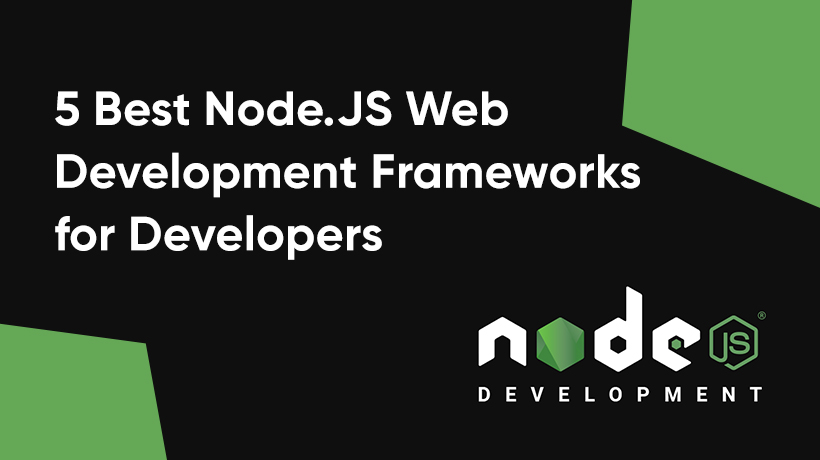 With the rich ecosystem of libraries, packages, and built-in tools, Node.JS makes the entire web app development process a breeze. As the capability of developing light-weight, scalable, and production-ready web apps is offered by Node.JS, this runtime environment has become an ideal choice for developers and even renowned companies around the world.

As of now, Node.JS lives under the hood of more than 173,500 websites. This open-source, cross-platform environment builds a solid fundamental layer for web apps as well as services and allows programmers to leverage the same language for both server-side and client-side scripting. With the continuous and rapid escalation in the adoption and implementation of Node.JS web development, a series of primal Node.JS frameworks are anticipated to strongly, fiercely pull up their game and substantially drive the web app development landscape in the coming year. This article is aimed at introducing the foremost Node.JS frameworks that will contribute towards the use of Node.JS and reduce the web app development cost by about 12 percent annually.

Best Node.JS Frameworks for Cross-Platform and Web App Development in 2020:

Express.js, the most fast, flexible, and popular Node.JS framework, was built by TJ Holowaychuk and is backed by a large community. The community members actively contribute towards the continuous development and provision of more stable, robust, and secure updates, reforms, and functionalities of all the existing core features. The characteristics of Express.js frameworks, like flexibility, speed, and minimalism, make it the primary selection of many developers for web and mobile app development.

Some of the top features offered by Express.js framework:

After Express.js framework (GitHub stars: 41k+), Meteor.js is the second Node.JS framework that has over 40,000 stars on GitHub. Meteor.js is a simple full-stack JavaScript framework for building real-time, modern mobile applications and web-based JavaScript apps.

This cross-platform development framework is supported by comprehensive tutorials and documentation and maintained by a vast community of developers. In this, both the client-side and server-side components share the same APIs which results in providing ideal performance. The convenience of rendering and deploying the same codes on all devices and browsers enables the developer to push regular updates. And if there is a need to alter the code, the changes are directly pushed and applied to all devices and browsers in real-time. This framework works with a very lightweight architecture that is built with a few lines of codes only. One of the most valuable, flexible features of the Meteor.js framework is that you can integrate it with VueJS, Mongo, React, Angular, NPM, GraphQL, and Cordova. Due to this feature, you can use and switch to any other platform at an instance, without any hassles.

It was in 2013 that Koa.js got developed and launched by the same core Node project team that built Express.js framework and quickly achieved fame into the software market. This is one of the most futuristic Node.JS web app development frameworks that managed to grab the attention of not only developers and small companies but also large-scale, popular businesses in just a few years.

One unique feature of this framework is that it eliminates the need to make callbacks and allows developers to work with ECMAScript (ES6) methods. Operating as a powerful, expressive middle-ware for Node.JS and handling the requests itself, this framework provides you with more and better control over error handling and configurations. Using this Node.JS web development framework, developers can utilize various integral customization options and integrate features into their apps as needed. Since koa.js has streamlined component-based middleware, it allows programmers to structure the components as they want, thereby making the process of writing server and building blocks faster, easier, and more enjoyable.

It comes with a built-in proxy support system, content negotiation, and other several useful, effective strategies to perform different generic actions. Considering these features, it’s not wrong to say that this small yet lightweight and robust framework is the next-gen Node.JS web framework for designing web as well as mobile-based apps and APIs.

Hapi.js is a robust, flexible commercial centered server framework designed to build REST APIs, along with web services and other software applications. However, when introduced initially by Eran Hammer in the year 2011, its sole purpose was to handle Walmart’s traffic on black Friday. Similar to Express.js web development framework, it also serves data and requests between the client-side and server-side by acting as an intermediary.

This simple yet powerful and rich in configuration MVC framework allows you to build reusable app logic and functionalities in a prescriptive and segmental manner. Another key advantage of this Node.JS web app development framework is that the implementation of new features and the eradication of errors with Hapi.js is efficient and fast. In addition, the potential and static websites can easily be developed and deployed by integrating the Hapi.js framework with MySQL, Postgres, and MongoDB. Since it offers a full-featured, high-performing JS templating engine, adding and displaying dynamic content on websites becomes relatively easier.

The arena of Node.JS web frameworks is undergoing constant, rapid changes and advancements. With an increased demand for JavaScript frameworks for front-end development, every year new versions and updates of existing Node.JS frameworks and JavaScript libraries are launched to facilitate and speed up the building and deployment process. In the end, the decision to choose the right tool for your web development project greatly depends on your personal preferences and the technological functionalities you want to achieve.