Home » Blog » React Native vs. Swift: Which One to Pick When Developing your Next iOS App? (Part 2 of 2) 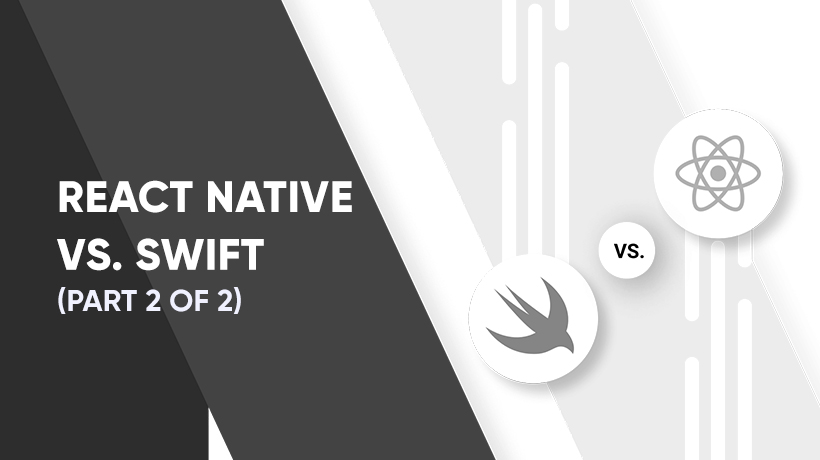 In the previous part of this blog post, we gave an introduction of Swift and React Native technologies and also explained that the demand for mobile apps is progressively rising. In this blog post, we will walk through the analogy and differences involved a comparison of React Native and Swift. It would provide businesses with some useful clues as to how they should pick the appropriate technology and tools for the next development project. So without ado, let’s get started!

Swift: As I’ve already mentioned, the development and execution of native apps usually require knowledge of a single language specific to the platform. And in this case, if you use the native language “Swift” for iOS mobile app development, you should have a profound knowledge of Swift language only. In some cases, however, you might need to learn some new frameworks as the language is designed to work with a forest of existing Objective-C code and different frameworks of Apple such as Cocoa & Cocoa Touch. While the learning curve for Swift is not too difficult, it can be pretty steep for Apple’s frameworks. To successfully work with one of those, developers need to bind the libraries of the native open-source framework available for iOS with Swift. Unlike other native languages such as Objective-C, Swift has less code and is highly reusable among iOS-powered devices.

React Native: React Native utilizes Java which is the most popular and widely-known dynamic, high-level programming language.While Swift is used as the strict-typed language for iOS only, React Native allows you to develop high-quality and functional mobile apps not only for Android but also for iOS and other hybrid platforms. Combining the power of Java and React.js allows developers to write modules in various languages, including Swift, Java, Objective-C, and so on. Simply put, this framework doesn’t bind you to a specific platform.

However, it comes with its own set of challenges involving various loopholes, flaws, and poor documentation. For instance, the code written in Java has a huge code base and is messy.

Swift: It allows your developers to write safer and more reliable code by eliminating the appropriate categories of common programming errors and waste. Since it has a very clear and concise code-base, you will write the less code and make fewer errors. That ensures more scope for stable code in the production environment. Swift enables developers to live by the terms – Encapsulation, Tight Coupling, Single Responsibility, & Composition over the inheritance.

Rather than spending effort and time manually, Swift is robust that uses Automatic Reference Counting (ARC) to track, analyze, and manage the memory usage of your app and also reveals the hidden mistakes in the code. However, you need to refine every element of your app separately and very carefully because the program needs to be written from scratch.

React Native: When developing an app with this framework, you need to write only one codebase that can be shared and transferred among Android, iOS, and other platforms. In terms of performance and functionality, it’s almost close to native. That’s because it has a user-interface almost identical with the native one and leverages and implements the ready-made code compositions directly to the internal APIs, ensuring all of the elements run smoothly. The JavaScriptCore virtual machine works as an ultimate power source both for Android and iOS. In fact, 90 percent of the source code can be utilized as ready-made components between platforms, which help in saving a lot of development efforts and acquiring productive results in less time.

Swift: The transparency in Swift’s code leads to quicker and efficient development time. Swift app development enables developers to future-proof their apps so the functionalities and facets can be extended later in the app as needed. That allows you to build, host, and scale your Swift projects rapidly without any technical lock-ins.

One similarity in both technologies is that there’s no constraint for extensive code sharing and reusability in either of said platforms, which result in increased development speed, time, and scalability.

React Native: Regarding layout and design, this platform offers an incredible feature called “Hot Reloading” that allows you to quickly visualize the changes you made and simulate the final or end-product. The entire procedure feels significantly productive and efficient since the modified code can be injected and run smoothly into the new variants of your Android or iOS app. This ‘Live Reload’ capability is like a live preview! Adding new features as well as functionalities and fixing bugs become as easy as pie.

Swift: Large community and incredible API support are two primary reasons why developers sometimes prefer Swift. That means you can access unlimited resources through your real native framework without any hassle, which reduce the need of any third-party APIs.

And if we talk about its community, you’ll find that Swift is open-source and supported by a large community. It means you get convenient and complete access to professional, skilled developers’ work and their experience. If you need a specific component or are facing any trouble, you can pick from a wide range of third-party libraries or get the right kind of help from experts.

React Native: One of the major drawbacks of this framework is that it doesn’t support all the functionalities and APIs, which significantly increase the dependency level on the external factories. While some are supported, there are a few that can’t be accessed through the native framework. Not to mention, you must have knowledge and experience about the functionalities and language you are working with.

The swift framework is still in its early days and doesn’t have a large community like the native app development, regardless of the fact that it was launched back in 2015. While the framework has only a small, limited collection of handy components to offer, that’s not a dead end. You can choose various components from the third-party component libraries available. But here’s the catch: when leveraging a third-party library, you might run into unexpected issues, such as bugs and glitches, with the code or structure. It’s because those libraries are not developed and tested by official, competent developers and might not be of top-notch quality.

Which One Is Better and You Should Choose?

To conclude, although both Swift and React Native have their own unique characteristics and pros & cons, they are quite similar when it comes to the physical presentation and somewhat function in an identical manner. For instance, apps developed with Swift employ as well as handle the GPU and CPU of the iOS-powered devices effectively, and React Native apps perform great in the memory category. In a nutshell, it won’t be wrong to say that Swift is quite close to React Native, which is great.

If you are still struggling to choose between them for your next iOS development, here are some questions you should ask yourself:

From improved readability of the code to the reduced bugs and development, there’s no denying that both technologies are rising, winning stars. Your choice boils down to a number of factors included in any mobile app development process. For instance, if you want to develop an app for both Android as well as iOS platform and don’t want to compromise on the speed, performance, quality, and efficiency, you should opt for React Native mobile app development.

Whichever technology you select, whether it’s React Native or Swift, consider hiring a reputable and experienced mobile app development company that is proficient with the latest methodologies & tools and can help you build an intuitive and robust Android or iOS mobile app for your business. They make sure that your app is scalable, well-tested, and user-friendly. Developing and launching a mobile app is an intricate and multi-stage process. That’s why it’s always an excellent idea to leave it to the pros.