Home » Blog » React Native vs. Swift: Which One to Pick When Developing your Next iOS App? (Part 1 of 2) 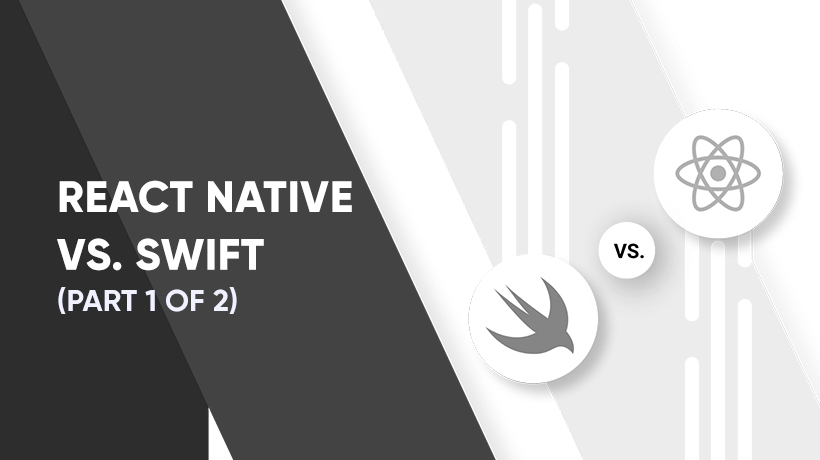 The need for web and mobile apps is becoming consistently vaster and also driving advanced, innovative approaches to mobile app development. Statista predicted that the total number of mobile phone users worldwide is forecast to exceed five billion by the end of the year 2019 and generate the revenue of around 188.9 billion US dollars via mobile apps and in-app advertising by 2020. Businesses that had their beginnings with a website and their eyes, priorities, and funds set on only website development are now thinking to develop mobile apps to reach new target clients and markets. To do that, they need to choose a platform, tools, and frameworks. While some businesses are focusing on React Native player that is a phenomenal player of the Android market, others are betting on Swift player of the iOS app mobile market.

Swift and React Native are both relatively ingenious, advanced technologies supporting the app development for a varied of Android & iOS devices. While Swift is a contemporary programming language, React Native is a JavaScript framework, and they both are known and respected for their equally beneficial and competent capabilities in the development arena. Today we’ll be looking at using React Native and Swift to build apps and also considering various comparison characteristics. This text will cover:

That will help you understand the difference between these two products and choose the right one for your next brand-new iOS app development, so let’s get down to business.

What is React Native?

React Native &React.js are excellent, robust frameworks developed and supported by Facebook to address the needs of creating a dynamic hierarchy of UI components and device-agnostic mobile apps. This cross-platform mobile development approach allows you to produce a wide range of apps written in Java and share as well as reuse the code (70% to be specific) among different platforms, including iOS, Android, web, and window apps.

In a nutshell, this open-source framework is a secure bridge used to transfer the ideas and functionalities of web app development into mobile app development. Unlike other hybrid platforms, React native doesn’t just wrap the web app in a native container but provides you with a real mobile web app, combining and offering the benefits and functions of both cross-platform and native apps.

It’s no secret that there are a lot of languages being used in the app market, but the one that is widely used and most popular among developers and designer for iOS app development is Swift. It’s a general and multi-paradigm programming language similar to many other ones, such as Java & C+, and hence its learning curve is pretty moderate and placid. Its syntax is concise and interactive yet quite expressive that allows apps to run lightning-fast on various iOS-powered devices and also supports Apple’s Cocoa and Cocoa Touch frameworks efficiently. On a side note, however, learning Cocoa Touch can be a relatively hard task. Native iOS app development with Swift ensures the more consistent and better quality code that works well with your app’s look and UI.

Why Are We Comparing These Technologies Anyways?

By now, we learned that Swift is a powerful language for iOS development and React Native is an excellent framework for Android, iOS, and hybrid app development. Furthermore, with the growing demands for various applications, brands continue to lie in the pocket or hand of a user consistently. In fact, 80% of mobile and smartphone users are prone to check their device and open apps within 15 minutes after getting up. It clearly states the underlying requirement of having a responsive and fully-featured app for the success of your business.

Nevertheless, building an app needs investment in terms of time, knowledge, and money, and sometimes a great deal of – usually when it comes to complex and cutting-edge mobile app development, such as Amazon shopping app. That’s why it becomes vital to know how these technologies work and make their development process more regimented and proficient. You will also learn to address the business plus subjective requirements of both Android and iOS-powered devices.

That’s it for now. In the next part of this blog post, we will compare the possibilities and provide the results of Swift vs. React Native comparison. Moreover, we’ll also help you understand which platform can bring scores of benefits for your next app development, Swift or React Native. So stay tuned!