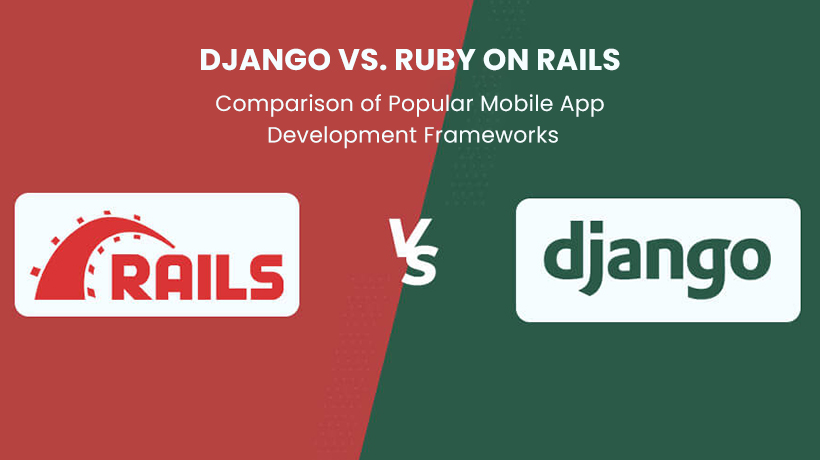 For decades now, web and mobile app development technologies have been going through significant makeovers, revolutionizing and advancing by degrees every day. Consequently, an abundant of latest and advanced frameworks and languages have been surfaced into the market for developers to exploit for developing and deploying different software, programs, and web, iOS as well as Android apps. Among those, two popular frameworks that are extremely mature and stand out the most are RoR and Django frameworks. Before comparing these tools and outlining their strengths and weaknesses, let’s clear one thing:

Are Django and Ruby on Rails Frameworks Dead?

While there are rumors floating around about these technologies being past their prime days and even dead in the tech market, ROR and Django frameworks are still alive and widely leveraged by tech giants and programmers. Matter of fact, stats show that 2020 and beyond represent even rapid expansion potential, greater capabilities, and increasing demand for these frameworks.

Such findings have certainly stirred heated, unending discussions and debates on the subject of RoR and Django itself. Naturally, businesses searching for the best solution for their web or Android/iOS app development product often get confounded when they come across various articles, blogs, or other online content declaring the demise of both RoR and Django frameworks. Delivering predictions without any explicit, concrete proof resulted in a decline in the interest of using these technologies from developers and companies overall. As said, however, Django and Ruby on Rails are not dying anytime soon.

That’s why we’ve created this article to help businesses that are having trouble deciding and choosing between RoR and Django for their next development project.

Django vs. Ruby on Rails: A Brief Overview

Django is an open-source, high-level Python-based web and iOS/Android app development framework developed by Simon Willison and Adrian Holovaty in 2015. This full-stack framework is a general-purpose language that supports not only rapid and fast web development but also powerful and dynamic apps for web, iOS, and Android platforms. The primary purpose of this tool was to simplify and facilitate the development process of complex, highly-scalable, and database-driven websites with a neat and pragmatic design. However, now this framework greatly encourages the virtual implementation of any project idea.

Ruby on Rails is an open-source, server-side app framework written in Ruby. Similar to Django, it follows a Model-View-Controller pattern and allows you to develop database-driven websites, web services, and Android, iOS as well as web-based apps. While both frameworks are born in different ecosystems and by different people, they share many similarities and have alike end goals, differing mainly in the language and applied philosophies.

Pros of Ruby on Rails

Cons of Ruby on Rails

Now that we have spent some time catching up on the overview of these frameworks, it’s finally time to dig deeper and get into the nitty-gritty of these platforms. Comparing their technical aspects and understanding their pros and cons thoroughly is critical to keep your web or Android/iOS app development project above the waterline.

Both Django and Rails are pro mature, object-oriented, open-source, and dynamically-typed frameworks. Besides, they come with various libraries, interactive interface, and reliable support due to the contribution made by their respective communities. Some even think of them as siblings, due to sharing almost similar characteristics in terms of expressions and functionalities. The main difference only is under the hood of the language used in the ecosystem, in which Django uses Python and Rails uses Ruby for coding.

In the world of web development, Python is one of the most popular programming languages that generally puts emphasis on the readability and simplicity of the code. In addition, it’s very easy to mug up and fast to code. On the other side, Ruby is a general-purpose and readable development language known for being easier and fun to write. This language is designed in such a way that you can read and understand it in the same way as you read a normal book, it’s basically enjoyable.

Python is renowned for its clear, simple, and understandable syntax. The principle of greatest astonishment lies in the fact that it advocates and identifies single code indenting for a specific code action, making the process of finding and fixing bugs in the code relatively easy. However, the same cannot be said for Ruby. Writing code in RoR can cause several obstructions and make it difficult to distribute the task of reading maintaining, and testing the code to other team members. The reason being that RoR suggests thousands of different ways to perform one action or function. Naming the similar methods differently usually leads to lack of clarity and confusion.

Both frameworks are well-structured and use an MVC (Model-View-Controller) pattern. For Django, it’s known as Model-View-Template (MVT). From denoting the data structure to displaying the templating systems and layouts, both are similar for the most part, but the implementation differs ever so slightly. Irrespective of the framework used, the data of your web or mobile app development project will be arranged and represented in a proper, appropriate database with regular expressions between layers for URL validations within the framework.

In the battle of Django vs. Ruby on Rails, it’s observed that ROR is slightly faster than Python with Django with the difference of as small as 0.7%. As far as performance is concerned, they offer almost the same level of performance without any noticeable changes in the end results for a typical MVP or CRUP app. Having a rich repository loaded with out-of-the-box libraries, amazing plugins, and diversity of ready-made tools results in the fast speed and consequently the performance of RoR framework. Conversely, Django consists of the robust toolkit “Django REST framework” that delivers a wide range of authentication modules, media types, custom JSON serializers/deserializers, and other remarkable features. DRF allows web/app development companies to develop custom schemes, define URL structure, and use the built-in browser to test newly built APIs, thereby buoying up an expeditious development process.