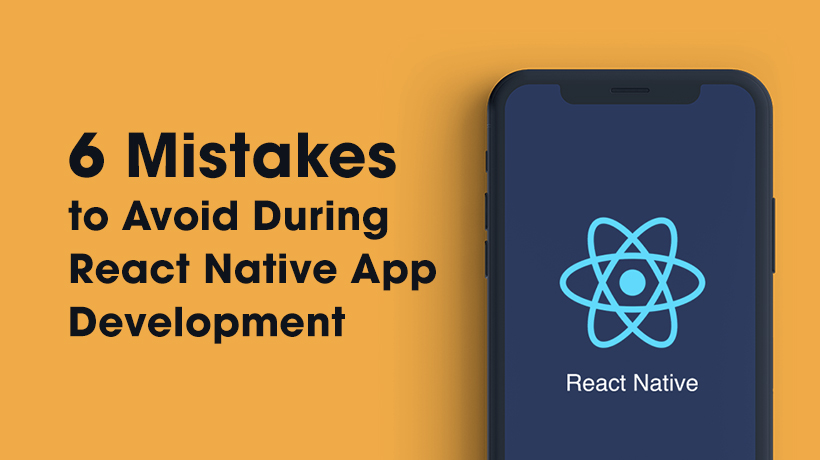 React Native, developed and launched by Facebook, is one of the most popular cross-platform app development frameworks that allow developers to build high-quality, scalable apps. One advantage of using this JavaScript framework is that it comes with the code reusability capability, enabling the developer to use the same codebase for developing both iOS and Android apps with refined user experience. According to many developers, React Native is the most robust and remarkable framework because it not only increases the speed of development with its open-source libraries but also curtails the development cost. That means rather than developing and deploying apps for different platforms, a single code can be leveraged across various platforms, including Android and iOS.

When practicing the process of iOS/Android app development using React Native framework, however, many developers often tend to experience challenges and make some common mistakes that can mess up the user interactions and overall experience of the app. Most of these mistakes are generally attributed to sheer overlooking of some features and are easily avoidable. In this article, we’ve outlined and explained the seven common mistakes that you should avoid to improve the performance and productivity of your React Native app.

Overlook the estimation of layout

One of the basic goals of using the React Native framework is code reusability. However, react native developers often commit a common mistake which is forgetting that an app page for iOS and Android platforms can vary and differ in terms of its page structure. A lack of experience and knowledge of design rules and layout guidelines for Android and iOS devices lead to wrong estimations. An experienced, skilled developer and mobile app development company should always prepare assessments for iOS and Android separately as there could be more than one layout.

Second, it’s critical to check all the database and backend endpoints when creating a web app to handle the logic and set up proper codes in your web app. You should also focus on validation schema and not just forms so that you don’t get any validation issues or errors later.

When developing a React Native application, often the inexperienced developers put all their focus on estimating the application layout. While planning the layout for iOS and Android versions are significant, you also need to pay attention to the data handling part of your project. Redux is frequently used with the React Native framework to alleviate various issues that might arise when your code grows and the app becomes complex. Redux is an effective, powerful state manager accountable to manage all the states, store as well as centralize the entire state of the app, and share the data easily.

If the redux store is not set up correctly, it can botch-up many things such as logic test, debugging, and data flow in large-scale apps. Here are some effective tips to integrate Redux into your react native app with proper file structure and configuration setup:

Here, one factor that you must take into account during redux application development is that it’s not suited for a small app project. That’s because when making changes, even the smallest ones, you will need to write multiple lines of codes. So, going for redux app development will be more appropriate for large-scale, complicated projects.

That way when referencing a module file that is moved or changed and doesn’t work, the issue is immediately found and the same can be fixed. Also, with proper and appropriate coding practices extending your app won’t be a nightmare, even if the code changes and grows over time.

There’s a one-to-one, direct correspondence between the Datastore and View. The datastore serves as a storage container to store, organize, and manage collections of data in the component. And the view is a container responsible to visually represent the data and support style, layout, accessibility controls, and other significant aspects. The view uses the state to determine the behavior of a component, retrieve the information, and then render it on the user screen. React Native makes use of a setState() function to initialize and retrieve the new object’s state and compare the changing information to the previous one, be it interactive or dynamic. Once the new state is compared and merged with the existing state, the previous state is sent back to the datastore and the new state gets added successfully.

This cycle continues throughout the component’s lifetime and tracks data in between renders. However, if your component uses state but you don’t set the initial state in advance and you change the state directly, the component might either render something unexpected or fail altogether. That’s because the cycle gets messed up and corrupts all of the previous states, causing abnormalities in your app or frequent crashes sometimes.

This is the most common mistake developers make during the React Native app development. Optimizing the images in a React Native application is an essential part and should be dealt with maximum attention as the performance of an app greatly depends on the image optimization. Unoptimized images not only consume high memory and storage but also reduce the performance of the app dramatically. Here are some tips for appropriate image optimization:

Some developers use stateless components to get a performance boost by printing out the same markup passed by the same props. Basically, stateless components in React Native don’t have any local state and extend any class, they just return what is given to them in the DOM. While there are some benefits of using stateless components, such as easy testing and fast implementation, they are not the ideal solution in all scenarios and use cases.

Nowadays, more and more developers are using PureComponent to implement class-based components and improve the speed and performance of their React Native apps. In this, it performs a shallow equality comparison between the existing values and the new value change to check whether or not the values (state/props) have changed. If the props and state of your component are not immutable, PureComponent will not unnecessarily re-render your component every time, preventing the expenses of re-rending and subsequently boosting the performance and speed.