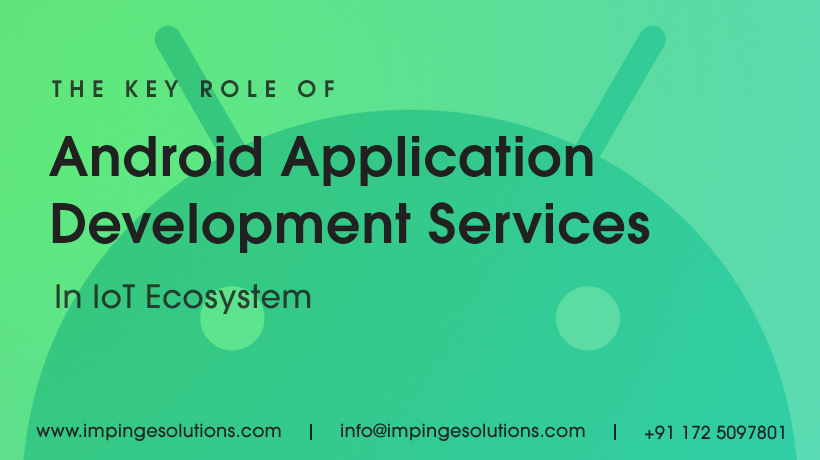 Among the most prominent devices and operating systems today, Android is one of the most used and the most popular method. The operating system is used by around half of the population across the globe. This is mainly because of the numerous advantages that it offers. Mobile technology has changed communication in unique ways. In the recent digital age, there are a lot of mobile users than personal computer users. The mobile technology has opened up a lot of avenues for each company to connect and to reach to their targeted audience. This shows that android application development services are the most looked for services in the information technology sector.

There is no count to the mobile app developers who cater to the android app development services. Service companies have an expert team of the android developers possessing updated knowledge of the recent trends and release which help in delivering the world-class applications.

Why is Android so much in Trend?

No doubt, Android is very much simplified. Additionally, the best mobile app development company is highly sought after to build up the most useful applications. Now, what makes the operating system so popular? The most important reasons for the prominence of Android and app development is, it is free. Android, right from the day of its release choose to be free, and Google would keep its fee in the future as well. This has caught the attention of hardware manufacturers throughout the world, to bring out affordable smartphones that would be powered by a completely free operating system which is Android.

Since it is free, it enabled Google to join hands with a lot of leading hardware manufacturers and bring up a competent smartphone. Moreover, Android is also an open source. Different from other mobile operating systems that are protected by various copyrights and laws, Google has decided to keep Android open. It enables a big pool of active and talented developers, no matter they are working with a mobile app development company or freelances across the globe to contribute their best to the operating system. With a lot of intelligent brains working for the operations, fresh and new ideas were generated and implemented.

How Android accompanies in the Internet of Things

The Internet of Things (IoT) is here, and it is growing fast. In simple words, the Internet of Things refers to the advancing interconnectedness of different smart devices over the internet. The devices feature internet connectivity and sensors that let them receive, collect and transmit the information.

Many devices have already hit the market and a lot more are set to be released when app developers work towards the connectivity of electronic devices in homes and offices. One could have easily controlled the TV, refrigerator, toaster or treadmill from a smartphone. However, the Internet of Things is possible only because of the availability of the platform wherein these devices can operate, and then enter Android.

Why Android has been the Key Driving Force behind IoT

A glance at the marker reveals that most smart devices run on Android. Anyone who is acquainted with the smartphones is known to this operating system. Now, it is the world’s leading mobile device operating system, edging out iOS. The running system war did not stop with the smartphones. The battle for the top is being fueled now by the developing demand for interconnected devices and Android leads the charge. The Internet of things world is being made and managed for android far.

There are a lot of reasons why Android and Android app development is at the forefront of IoT:

Android is the universal front end where developers could work. The operating system has rapidly risen as a software platform mainly because Google choose to give it away to the developers and device makers. The Linux-based software is open source, therefore allowing anybody to use the source code and then customize it for use in any device and gadget that they have in mind. The number of devices dependent on Android today is countless. With such big names running on Android, it is easy to see how Android acts as the front end for the Internet of Things. It is cheap and easy to develop for IoT, making them much more affordable for the consumers.

A gadget is just a gadget. With the right application and software to help run it and perform various tasks, it becomes a lot more. The app is what makes it possible to use the Internet of Things devices. Android right now is the biggest platform in the globe. It is not surprising that Android drives the IoT movement.

There are a lot of IoT devices made on Java. Therefore it makes sense that Android is driving the IoT market. Android enables Java to be applied in such a manner that makes sense, in comparison to the use of embedded Java which needs dedicated devices.

Sensors identify the physical properties like temperature and then generate the digital signals. There is a lot of hardware vendor who is dependent on some specific domains like Linux, Android, and Windows. The availability, as well as the priority of Android, makes it an easy win in this particular category. The truth that Android is open source and could be tweaked t use in any device is what makes it a popular choice among the device makers.

When it comes to an understanding of the app for Android in IoT, one needs to understand the ecosystem of the IoT as Android’s role in it.

There has to be device and a processor with an operating system that supports the IoT ecosystem components. This has to be small and portable, which hardly use up a lot of power, but could offer regular connectivity. In a lot of examples, affordable Android devices are chosen for this. Android devices meet the requirements for supporting a broad range of sensors. There are different tutorials available to help the developers.

There is a need for the component that supports the data transfer from the sensor. The two most simple options available are MQTT and XMPP. Android supports both open source implementations. The libraries could be used in Windows, Linux, and Android.

There should be some program that receives and stores the data. It could make a type of standard Linux server. The server gets some data and then decodes and then finally processes it. Data could also be used for the following analysis.it

t With this, it is sure that Android is the primary driving force behind the Internet of Things devices.